Time to dispel another 'golfing myth' which crops up irritatingly from time to time, a bit like 'Comedy Pin Positions'!

That is, the myth of the "Crowned Golf Hole" which most commonly manifests itself following a putting round of 'under-hit putts', which have a tendency to veer away from the hole as the ball runs out of steam. The holes are mostly cut by our Course Manager, Mike Poole, so any criticism of the quality of hole cutting, or pin selection, can be attributed to Mike.

So, if we cut the holes properly at Crowborough, what is the real reason for that 'crowned' hole effect which so irritates people as their putt slides away and misses? Easy really, quite apart from a mis-read, or a ball simply running out of steam, it's pretty obvious that, as nobody stands with their feet right on the edge, or within a few inches of the hole, even when retrieving their ball from the hole, the grass inevitably remains undisturbed throughout the day, and stands up tall and proud and is not being constantly trampled down flat by foot traffic. Hence the grass will be LONGER around the edge of the hole, almost like a halo effect or the rings around saturn! So don't let your putts die at the hole or they will miss unless right in the middle. Dave Pelz the short-game king reckons that 17" beyond the hole is the perfect pace needed for a putt to hold its line, so just remember that when your ball is next left sitting, agonisingly on the edge of the hole, peering over the edge - It wasn't EVER hit hard enough to hold its line!

But to show that there is no such thing as a crowned hole at Crowborough, or that any self-respecting Greenkeeper would be responsible for cutting a crowned hole, we have provided an educational slide-show to show how the job is done here. Hope you find it both interesting and educational. Remember - hit it a bit harder next time! 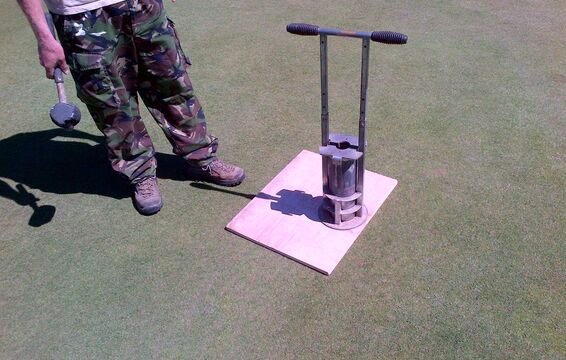 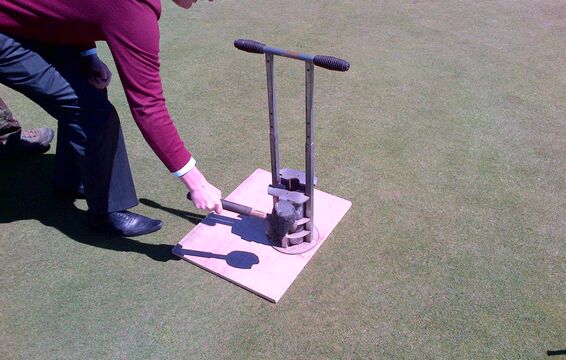 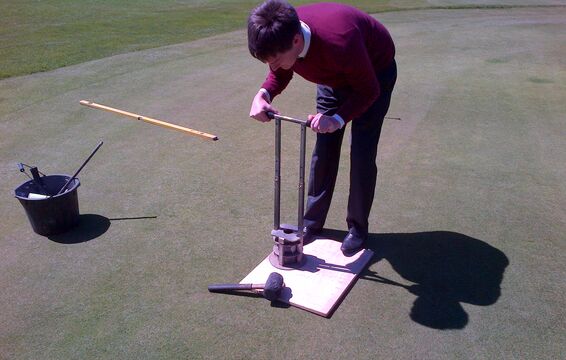 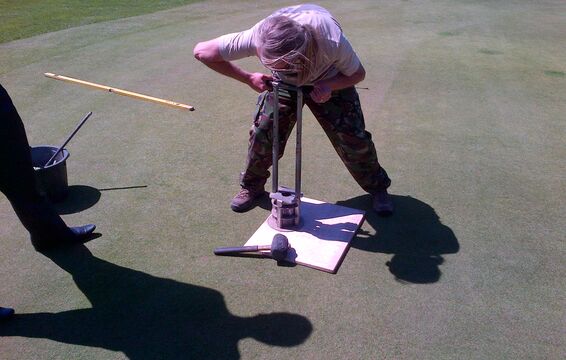 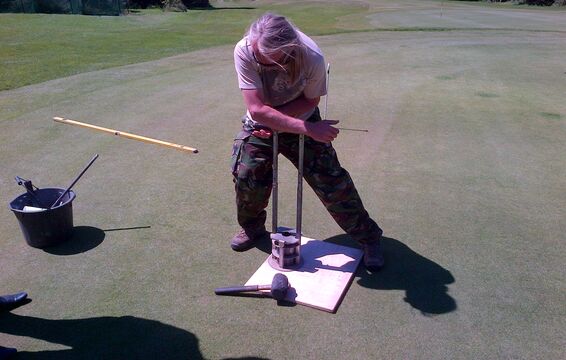 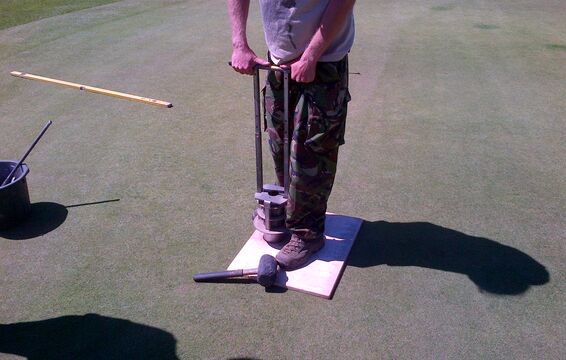 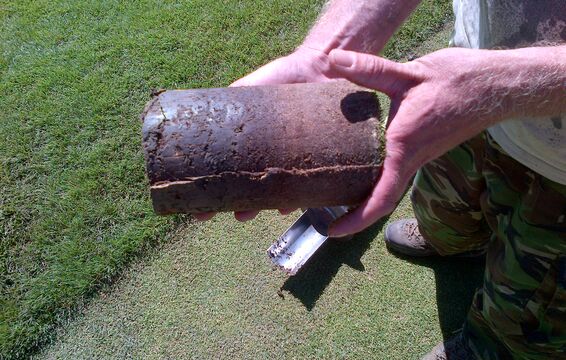 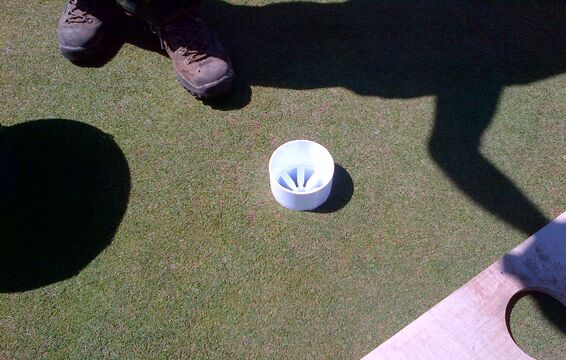 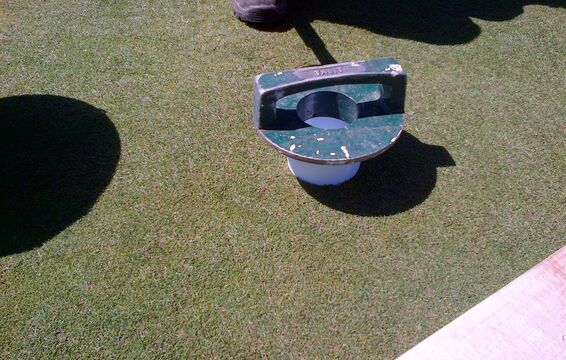 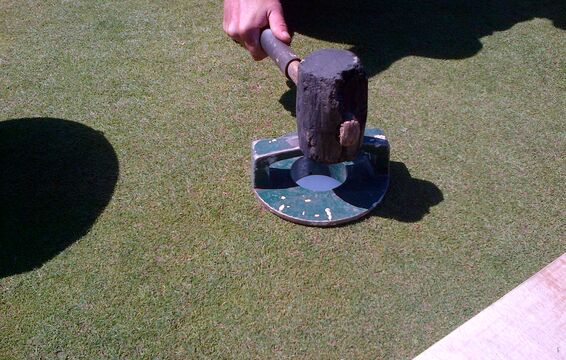 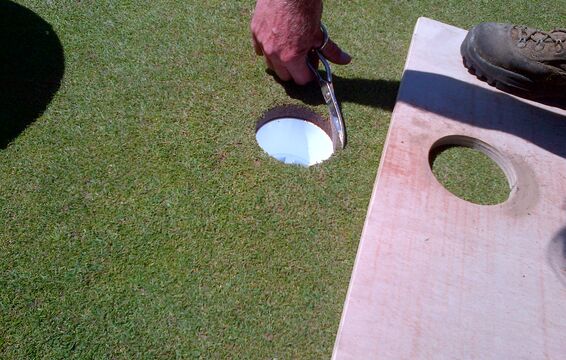 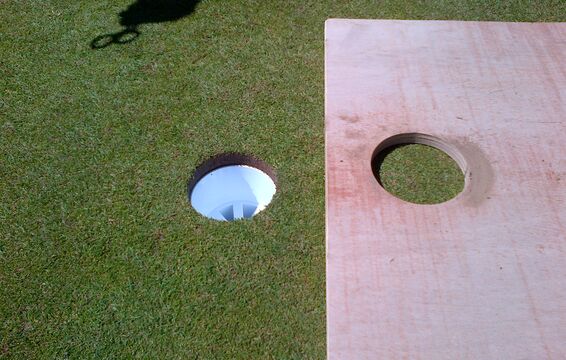 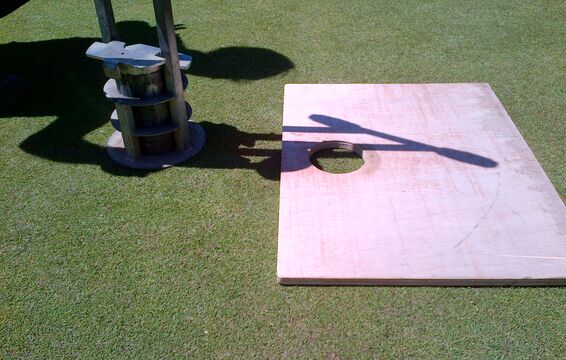 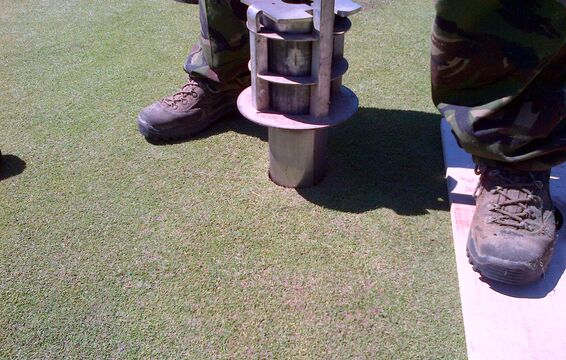 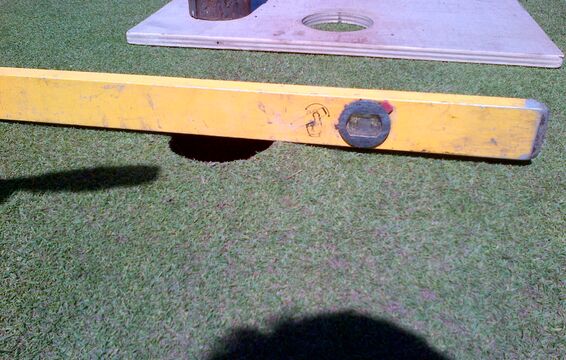 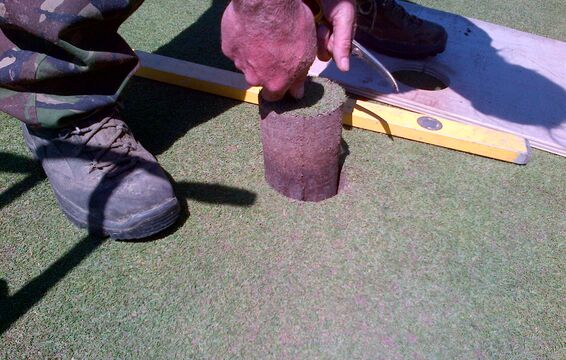 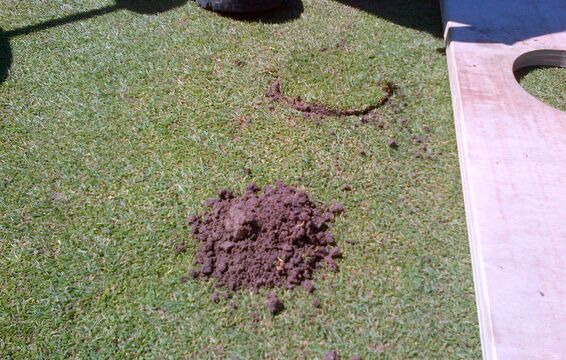 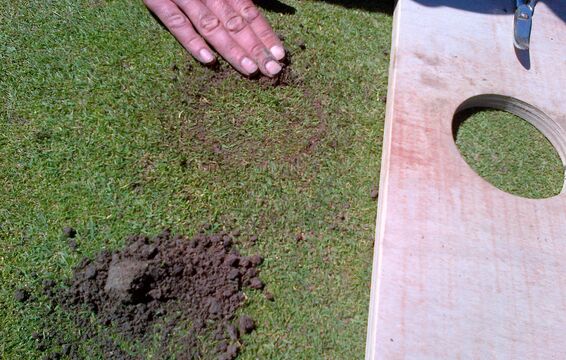 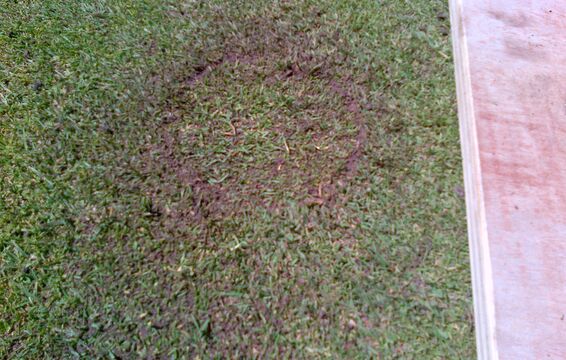 James hammering the cutter into the ground

James unsuccessfully trying to lift the cutter and plug out of the ground! and NOT standing on the Board!

Mike Poole to the rescue

Place the plastic hole cup into the hole

Using the Cup setter, the cup is hammered into the ground

A quick trim with the curved scissors ensures a nice clean, sharp edge - so no excuse for lip-outs!

There you have it - a perfectly cut hole, crisp and sharp. There are NO crowned holes at Crowborough, it's a myth; an excuse.

Now - see how to do it incorrectly and create a 'crowned hole'. Easy if you DON'T use the board!

Spirit Level clearly shows the fact that the turf has lifted creating a crater, or 'crowned' effect. All from not using a Board.

The new hole plug goes back in the old hole.

...and top dressing worked into the gap

Until almost invisible... Old holes will will occasionally dry out and shrink in high temperatures. Rule 16-1c allows you to either raise or press down an old hole plug. Relief does not permit you to drop away from an old hole.