The large area of stripped turf to the left-hand side of the 18th hole is the first of some new heather regeneration areas planned for the coming years. Advance notice of this work has been suggested at different times and over a very long lead-in period, firstly in the Course Review Document from August 2012, and more recently in the Environemantal Report by Ecologist Mike Edwards published in June 2013 (Both documents are available to members on the website under 'Information - Course Documents'. The purchase of the highly specialised Weidenmann Heather Mower/Collector 18 months ago also gave us, not only the ability to harvest valuable heather seeds from the Common, but also to be able to mow and manage exisiting and new heather to a higher standard in the years to come.  Both for the improved playability of our golf course, but also for the ongoing health and vitality of newly generated heather in the future. It's purpose was not merely to cut down the long wispy grass that grows taller and rises above our exisiting, and largely degenerating heather, which in doing so would only continually trample and harm our exisiting heather and also collect mountains of compostable cuttings. 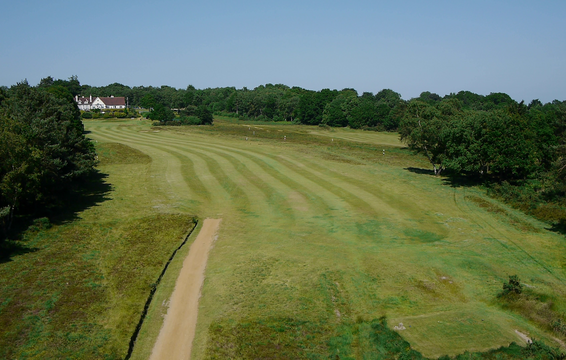 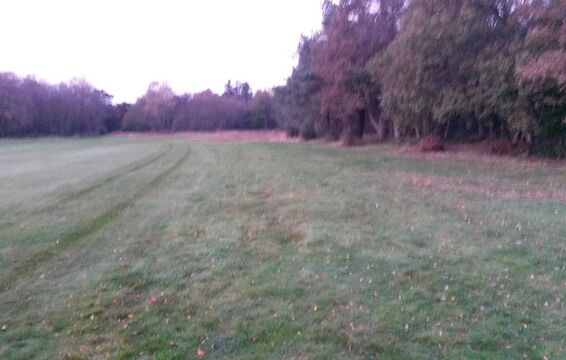 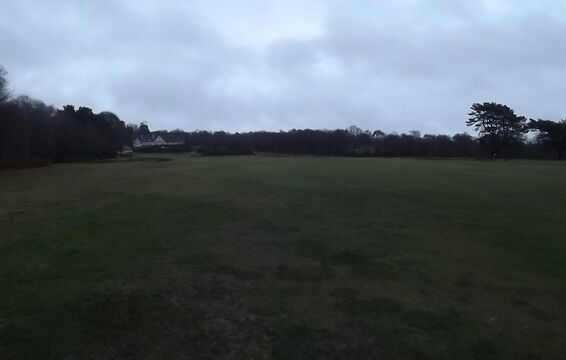 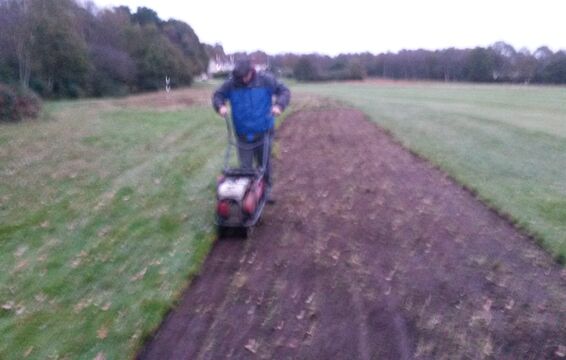 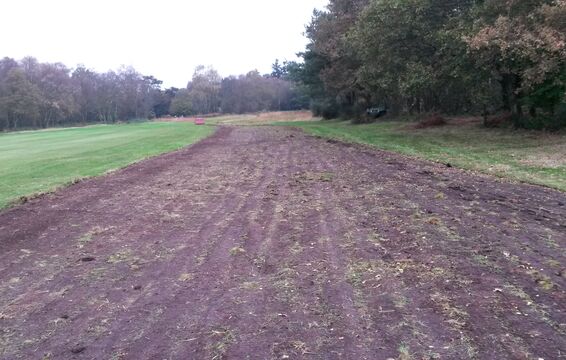 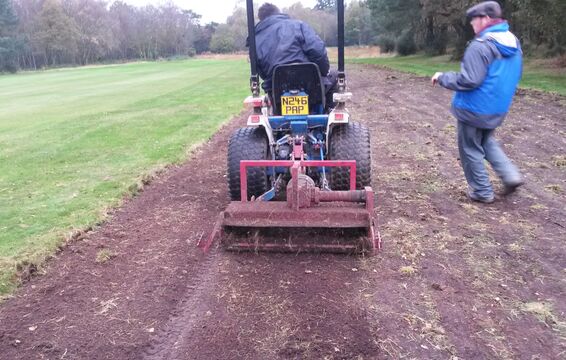 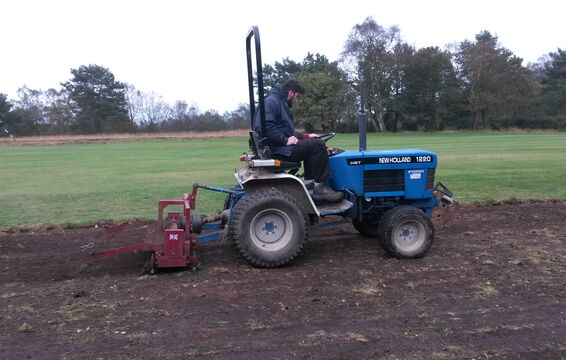 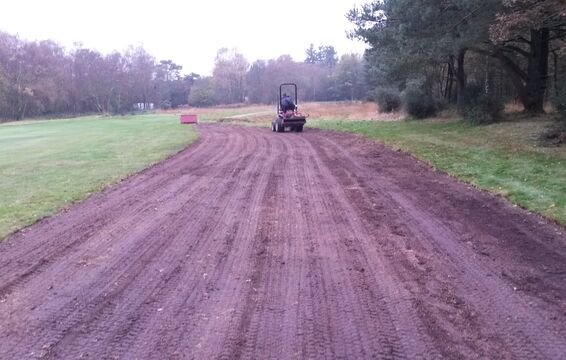 Left-hand side, turf subsequently removed between the two areas of heather

Site prior to turf stripping (apologies for picture quality)

Prior to stripping viewed from the tee

Consolidating area and for ease of future mowing

The 18th hole area recently stripped, was a ground-breaking project at Crowborough, being the very first time a turf-cutter has been used to neatly cut and remove thick turf to a consistent depth, so close and adjacent to a fairway, but also in a place where heather was known to once previously abound. As the heather growing at each end of this previously densely grassed area demonstrates. Previous attempts at re-establishment on the left-hand side of the 7th and 10th holes have been by bracken, gorse and general scrub clearance by heavy machinery, although both showed dramatic and encouraging signs of heather re-growth within a matter of a few months. The most recent photographs below, from as recent as August 2014 from the 10th hole, show vibrant, healthy young heather pants and seedlings continuing to flourish in an area cleared only 15 months earlier. Some 'before and after' photographs of the 16th hole at Royal Ashdown also clearly demonstrate the opportunity for success, but also illustrates the time-scale involved where we all need to patiently wait for the slow-growing heather plants to become re-stablished.

This page and accompanying slide-show images will be added to as and when the opprtunity arises and will hopefully form a long-term archive of the success of what we are now undertaking.

The Course Review Document published in August 2012 referred to a report on Heather by Course Manager Mike Poole written in 2010 in which he said...

"The heather at Crowborough Beacon is in decline. Heather is a relatively short lived evergreen shrub with a very interesting life cycle. After germination heather enters what is known as the pioneer stage which lasts approximately 5 years. At this young stage the heather is prone to damage from trampling, therefore any area we regenerate must be protected from such trampling. The second stage of heather growth is the most productive stage known as the building phase. This phase has a period of very active growth which can last

for 15 years and it is during this time that the maximum growth, density and canopy spread are seen. During this time repeated, but infrequent cutting of the heather and the collection of debris is to be encouraged. Management carried out in such a manner will help to retain the plants building phase indefinitely. If neglected, heather will pass through the building phase and over 10 years or so it will pass through the mature phase and enter the degenerate phase. During these phases the plant tends to become very woody and loses its ability to recover from wear and tear. Regular cutting during these later phases of the plant’s life is very unlikely to encourage vegetative regeneration and more likely to hasten its ultimate demise. Ingress of both weeds and grass also becomes a problem as these weeds and grass, when mown, are responsible for enriching the soil which again is detrimental to the heather plants. Once we understand the life cycle of heather we can start to understand why areas die off or lose density and then become subject to weed and grass ingress. According to the foremost expert in the management of heather [Bob Taylor, Senior Ecologist of the Sports Turf Research Institute] the following reasons for the decline in heather in order of importance are;-

Over the past 12 years we have trialled various ways to improve and regenerate heather. It is not an exact science and whilst not all attempts have been successful it is clear that without if we do nothing the heather will continue to decline and eventually disappear. We need to instigate a regeneration programme and a complementary management programme so that we can create and maintain areas of heather, both on and off the golf course itself, to the standards of other high quality heathland courses. Done properly and in conjunction with other plans to make the course more user-friendly, we should enjoy faster rounds of golf and encourage fewer lost golf balls without losing the character of what should be a traditional heathland golf course."

Since that time various attempts have been undertaken to encourage and trial the likely success of larger scale heather regeneration as shown in the slide show.